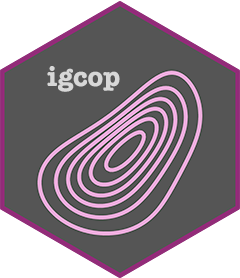 Currently under active development, and still developing a working version

igcop is not yet available on CRAN, but can be downloaded from this repository using devtools. Just execute this line of code in an R instance, after ensuring you have the devtools R package installed:

The IG copula family is defined by parameters θ > 0 and k > 1, although computations are problematic for k < 2, although mostly just for k close to 1.

What makes the IG copula interesting is in regression analysis, where the response is the second variable. If the response is heavy-tailed, and is linked to a predictor via an IG copula, then its conditional distributions have lighter tails with a non-constant extreme value index across the predictor space. The IGL copula is interesting in a similar light, except its conditional distributions are all light-tailed (!) – meaning that the predictor is solely responsible for the heavy tail of the response variable.

This package piggybacks on the base R syntax for distributions, whose functions adopt the convention:

For IG and IGL copulas:

All of these functions have a cpar argument expecting the value of the copula parameters. For an IG copula, this is c(theta, k), and just k for an IGL copula.

Here are some examples, starting with evaluating the density of an IG copula at (0.3, 0.6):

Computations are vectorized over both u and v (first and second variables). Here’s the cdf and density of an IGL copula at different values:

It doesn’t make sense to talk about quantiles for a multivariate distribution, so this is only defined for conditional distributions. Note that the “2 given 1” distributions swap the u and v arguments to better align with the conditioning.

Generating 5 values from an IG copula: